Originally we thought that Thomas just had caught a cold.  Runny nose, tired, just wanting to snuggle, and no fever.  We took him to the doctor just to have them double check he didn’t have an ear infection and his eyes were all full of drainage so we didn’t know if it was just the sinuses that were causing it or something else.  They said that Thomas’s ear looked ok and prescribed us an ointment for his eyes.  Later, that night Máté was going to try to sleep with Thomas downstairs and prop him up a bit and I would sleep upstairs until Máté left for work around 4am.  Well I no sooner had my pjs on and Máté was calling for me.  We had noticed earlier in the evening that Thomas had a pretty good cough.  Well now it sounded like he was struggling to breathe.  We each changed clothes lighting fast and I packed a bag and we headed to Children’s Hospital.  Just to add a little more drama to the story we were driving in a snowstorm to get there.

Once we got there they quickly diagnosed Thomas with croup. He immediately received a breathing treatment, which he hated.  After that they took us out of the triage room to an ER holding room.

While we were in here Thomas received two doses of a steroid medication and another breathing treatment.  That treatment was worse than the first one.  Mate and two nurses had to hold him.  I was trying to sing his favorite songs and rub his legs to calm him down.  Nothing worked and I could see tears in Máté’s eyes.  It is so heartbreaking to watch your child go through things that make them so upset.  I am sure the mask having to be on his face was scary to him having never had anything like that before.  They decided that because he had to have double doses of everything they wanted to keep him overnight.  Of course they wanted to move us just as he finally fell asleep. 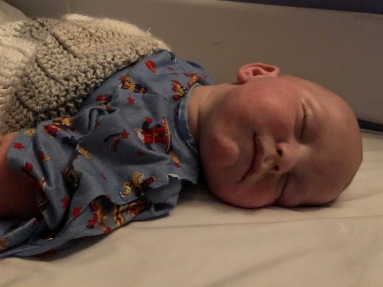 It was 2am when they put us in our own room.  It had a decent pull out couch and a recliner.  I told Máté that I bet the recliner brought back some memories.  (Poor guy slept on one of those for a week before and after I had Thomas)

I was just happy to have a sleeping baby and a place to sleep even if only for a little while.  Thomas looked so cute in the crib in the room.  We had to keep those plastic curtains down so that he couldn’t try to escape. 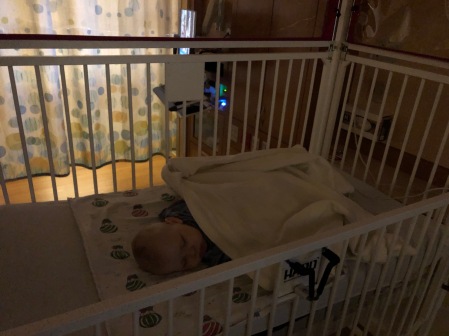 Once again Children’s was so great.  All of the doctors and nurses were fantastic.  They all reassured us several times that we did the right thing in bringing him in right away.  It was so scary to hear Thomas breathing the way that he was.  Once those treatments took affect it was so much better.  He slept pretty well through the rest of the early morning.  Took several cat naps, but by about 10am he was itching to leave.  We were too.  Leaving the house so quickly I packed zero toys for him and the last thing I wanted to do was let him crawl around on the floor.  We let him play with his blood pressure cuff, a package of mints, his diaper cream, really anything that we could find.  He liked to sit by the window and look out.  This was our view when we got up there.

So much snow.  We were discharged around 11 and then had to make our way back to the ER to get our van.  Which was buried under snow and we had no snow brush.  Seriously we live in Wisconsin we should know better. (Normally it is in there, but it got tossed in a bag that was taken out when we went to the airport!)  Máté used his arm and a credit card to scrap off the ice.

I was so happy to finally be going home.  We had a follow up appointment on that Monday with our pediatrician and Thomas ended getting put on another steroid for three more days.  The poor guy just couldn’t shake it.  It was a lot of sleepless nights and so many snuggles.  I loved that part but hated seeing him feeling so bad.  I would have gladly switched places with him.

How did you handle your child’s first sickness?  I sure hope it didn’t include a ER visit and hospital stay like ours did.