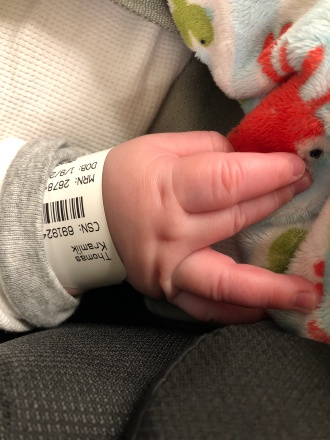 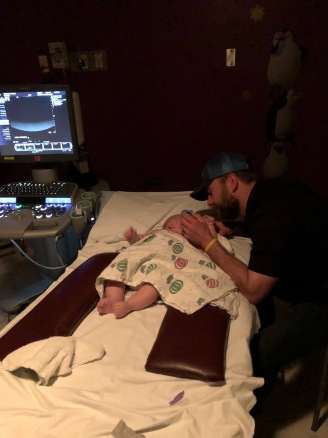 It was scan day here in the Kramlik house.  Every three months  Thomas has to go and have an ultrasound of his abdomen done along with blood work to check his AFP level.  They do this because children with Beckwith Wiedemann are at risk for developing childhood cancer.

We went in April to have his first round done and have 31 more of these visits left.  When they did his scan they found a cyst that they said was very small and appeared to be benign.  They wanted us to have a follow up scan done in one month to check on it.

That day was today.  Thomas has to fast for the ultrasound so I make the appointment for right away at 8am.  He can have nothing for three hours before the appointment.  That means we set our alarm clocks and wake up at 4:30am to feed him.  We usually give him any where between a half an ounce to an ounce more than his normal amount depending on his mood.

Today I saw a husband pushing his wife in a wheelchair taking her up to the NICU.  I remember very well Máté doing that with me.  Máté would get me up around 5am so that I could get ready and by 6am we would be out the door and on our way down.  I liked getting to Thomas’s room by 7am when the shift would change and we would get our day nurse.  I am going to do a post about our NICU experience soon so I will get more into the details of that then.

Thomas did so well at the scan today.  He was a little wiggly so we can gave him something that they call “sweeties”.  It is 24% sucrose, so sugar.  The tube of it is so small and Thomas really liked it.  Máté told me not to give him to much because we don’t want to get him all hyped up!  Ha ha, crazy baby Thomas.

We won’t know the results of the ultrasound for a least a day or two.  It is so nerve wracking.  I was just thinking how for a few weeks we are able to be “normal”.  Not thinking about the next scan or blood test and what the results could mean.  We just get to focus on Thomas and have fun.  Then it gets close to appointment time and the nerves start to set in.  This is a cycle that we are going to be stuck in for at least the next 8 years.

Beckwith Wiedemann is so rare that most people don’t even know what it is.  As I have said before we are lucky with Thomas that he doesn’t have many complications that this syndrome can bring.  That doesn’t mean however, that they couldn’t show up.  We have been told that at any time one side or part of his body could start growing larger than the other.  His tongue could all of a sudden start growing quickly too and cause major issues as well.  Not to mention the risk of cancer.  No one likes the “c” word.

I am holding tightly to my faith as I know God doesn’t given you what you can’t handle.  We are lucky that we have a very good support system that lifts us up everyday.  So for today I am going to hold Thomas a little tighter, kiss him a few thousand times instead of the usual hundred, and be thankful that he is here with me.